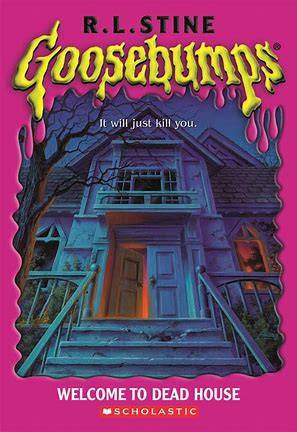 “Josh and I hated our new house.
Sure, it was big. It looked like a mansion compared to our old house. It was a tall redbrick house with a sloping black roof and rows of windows framed by black shutters…
This house is creepy, I thought unhappily.” (page 1)

Any book I hate on page one doesn’t deserve to be finished.

No joke: I read the first page and slammed the book shut.

Q: How many “ly”s does it take to write a Goosebumps book?

Every page had at least two if not eight adverbs.

The character’s (highly explained) emotions jumped around like Kangaroos on coffee.

One moment the kids are calm the next they’re yelling angerly.

#1. There’s no point to anything in the plot. The characters do stuff for no reason and it never gets explained.

#2. The ending is extremely unmoral. (I didn’t read that far but I did read a plot summary which discussed it.)

#3. it’s surprisingly violent and graphic. Um…. not sure what middle schooler wants to read about cannibalistic zombies or melting non-dead dead people or strange boys in the main girl’s bedroom ().

Not quite sure who to recommend this book for other than people who don’t care about plot or character’s morals and just want to be weirded/grossed out while reading a middle grade horror book.

For More Information about the Book and Author Click: HERE (warning: some of the pictures on this site are disturbing)

Violence: Kids push each other. Amanda dreams that she and her family are zombies and are having a dinner of human remains (described in discussing detail – I skim-read/skipped a lot of this part) Several people melt. A man has a flashlight melt into his head. A girl thanks Amanda for killing her.

Other: People argue. The kids are disrespectful. The kids scare each other. The parents tied to a stake. As the Benson’s are leaving town they see another family being shown Dead House BUT the Bensons just keep driving therefore condemning the other family to be murdered by the townspeople.

Abibliophobia (n.) the fear of running out of reading material

Ballycumber (n.) one of six half-finished books sitting on your bed

Bibliobibuli (n.) one who is drunk on books – one who reads too much

Bibliophagist (n.) one who devours books

Bibliosmia (n.) the smell of a good book

Bibliothecary (n.) one who collects books

Book-bosomed (n.) one who carries a book with them everywhere

Endpaper (n.) papers glued to the inside covers of a hardback book

Goya (n.) suspension of disbelief that occurs when reading a good book

Half-Title (n.) leaf in front of the title page

Headpiece (n.) ornament at the beginning of a new chapter or section

Librocubicularist (n.) one who reads in bed

Nonbook (n.) book with no literary or artistic merit

Signatures (n.) pages chronologically divided into sets of sixteen to be assembled into a book