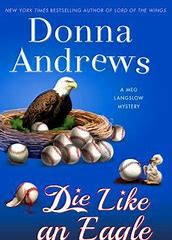 ““…The porta-potty’s out of order.”
“How can a porta-potty be – holy cow!” He had gotten close enough to see over my shoulder. “Okay. Can do. Come on, Mason.”
“But the game’s starting any minute,” Mason protested.
“Not now it isn’t,” I said. “I’ll explain later, but you’ll be back in plenty of time for the game. And Rob, on your way past the bleachers, send Dad over here.”
Rob and Mason hurried off. I dialed 911 and prepared to tell Debbie Ann, the dispatcher, that there was a dead body at the ball field.” (page 49)

Meg Langslow was looking forward to a nice quiet weekend of watching her twin sons play little league baseball. However, the games take an unexpected turn when Meg discovers the umpire stuffed inside a porta-potty – shot through the head. Theories as to the motive for the murder whirl around town but the most commonly believed is that the killer got the wrong person. Biff Brown, the dead man’s half-brother and uncanny look-a-like, is one of the most disliked men in town and the list of his enemies is longer than the length of a Summerball regulation baseball field. Meg needs to talk to Biff about fulfilling his construction contract with the town and as she searches for him, she comes across clues as to who killed Biff’s brother and who is planning a second kill.

I can never look at a porta-potty the same again.

Or if I’ll find a body inside.

Die Like an Eagle is the twentieth book in The Meg Langslow Series and before you get mad at me for reviewing book number twenty here is my review for the first book.

Which doesn’t help you with books two through nineteen.

The nice thing about this particular series is that you can hop in at any point and not feel too confused. Yes, there are some running gags, jokes, and references to events in previous books that won’t make as much sense if you haven’t read the whole series, but Donna Andrews does a good job of making each book explain itself.

For example: my mom and I read Duck the Halls thinking it was a standalone and were completely shocked when we learned it was number sixteen in the series.

After that we read book ten (Six-Geese-a-Slaying) and book fifteen (Hen of the Baskervilles) before getting to book one (A Murder with Peacocks) and reading through the rest of the series in order.

(We’re so weird we went through the entire Mysterious Benedict Society Series backward – although, that was a mistake and not a reading plan I’d advise)

Die Like an Eagle, is a witty book with handfuls of chuckles per chapter and several laugh-out-loud moments.

However, due to reading a one star, scathing review of The Penguin Who Knew Too Much,(number eight) I feel I must give a warning:

Please do not go into this book expecting a Hercule Poirot or Sherlock Holmes level of seriousness.

This is murder – with a porta-potty.

I recommend Die Like an Eagle – with caution, because there is the occasional swear word – for anyone who likes cozy mysteries.

For More Information about the Book and Author Click: HERE

Violence: Boy is hit in the eye with a baseball. A man is found shot in a porta potty. Man falls off the bleachers. Biff grabs Josh’s arm so hard he leaves fingerprints. Meg punches Biff in the nose. Biff tries to strangle the umpire. Two car accidents. Verbal abuse of baseball players. Physical abuse and a boy with a serious arm injury are mentioned.

Sensuality: A woman wears inappropriate clothing. Two characters are in the process of getting a divorce.

Abibliophobia (n.) the fear of running out of reading material

Ballycumber (n.) one of six half-finished books sitting on your bed

Bibliobibuli (n.) one who is drunk on books – one who reads too much

Bibliophagist (n.) one who devours books

Bibliosmia (n.) the smell of a good book

Bibliothecary (n.) one who collects books

Book-bosomed (n.) one who carries a book with them everywhere

Endpaper (n.) papers glued to the inside covers of a hardback book

Goya (n.) suspension of disbelief that occurs when reading a good book

Half-Title (n.) leaf in front of the title page

Headpiece (n.) ornament at the beginning of a new chapter or section

Librocubicularist (n.) one who reads in bed

Nonbook (n.) book with no literary or artistic merit

Signatures (n.) pages chronologically divided into sets of sixteen to be assembled into a book